The See, or Cathedral of Évora, is one of the biggest and most beautiful in Portugal. It is one of the city’s ex-libris, classified by UNESCO as “World Heritage”, that is why one cannot pass by Évora without visiting its Cathedral. 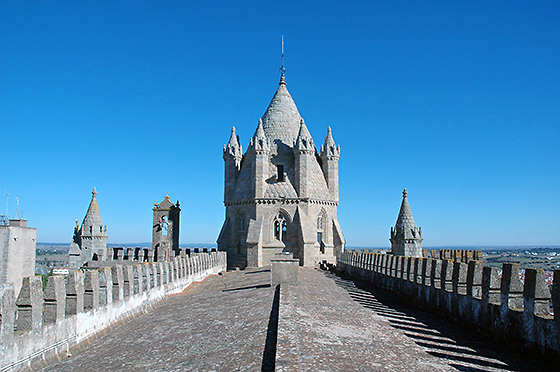 Its construction, in the Roman-Gothic style, has the shape of a Latin cross, mostly visible on the inside. It was started around 1280 and finished by 1350, from the 13th to the 14th century.

It is situated in the Acropolis, the highest point of the city, where one can also see the Roman Temple of Diana, highlighted from far away by its beauty of the domed top or lantern tower, very similar to the old Cathedral of Salamanca and to the one in Plasencia and Zamora, in Spain.

Equally visible is its fortress shape, as seen by the terrace circled by battlements, typical of the fortress-churches of the Middle Ages. 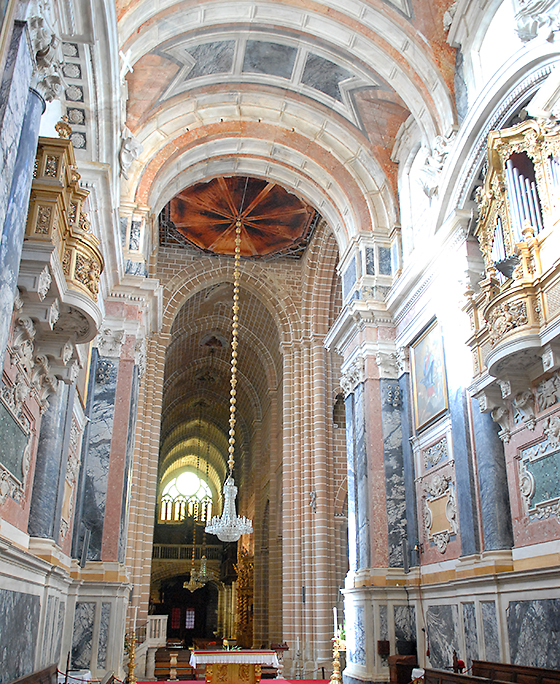 The existing Main Chapel replaced the primitive Roman-Gothic one, considered at the time for having reduced dimensions for the solemnity of the celebrations.

It was built in the 18th century, with the patronage of King D, João V, in the Barroque style. And it is distinguished by its grandeur and the beauty afforded by marbles of various colours, whether on the walls or on the flooring.

It is a work of art from the famous German architect Johann Friedrich Ludwig who was also responsible for the monumental Convent of Mafra. Worthy of note are the great crucifix in cedarwood, the painting of Our Lady of the Assumption, the busts of Saints Peter and Paul and the choir stand of Scholla Cantorum and the organ of Oldovini. 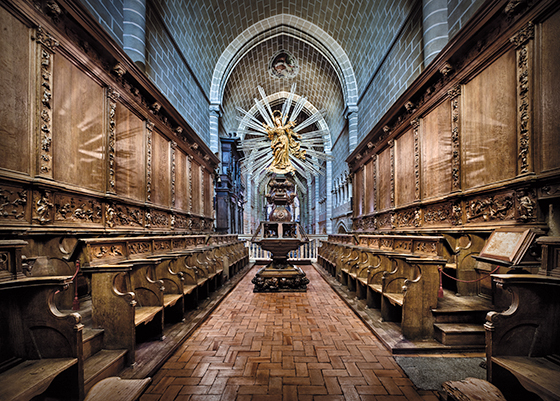 Its decoration in high-, medium-, and bas-relief is a marvelous artwork of the Renaissance style.

The Upper Choir is a construction from the 16th century and it replaced the primitive Lower Choir located on the top of the central nave.

It was the place where the chapter delegates sang the canonical hours of the Divine Office. It was further endowed with a majestic pew, built by order of the first Archbishop of Évora, Cardinal D. Henrique, future King of Portugal. 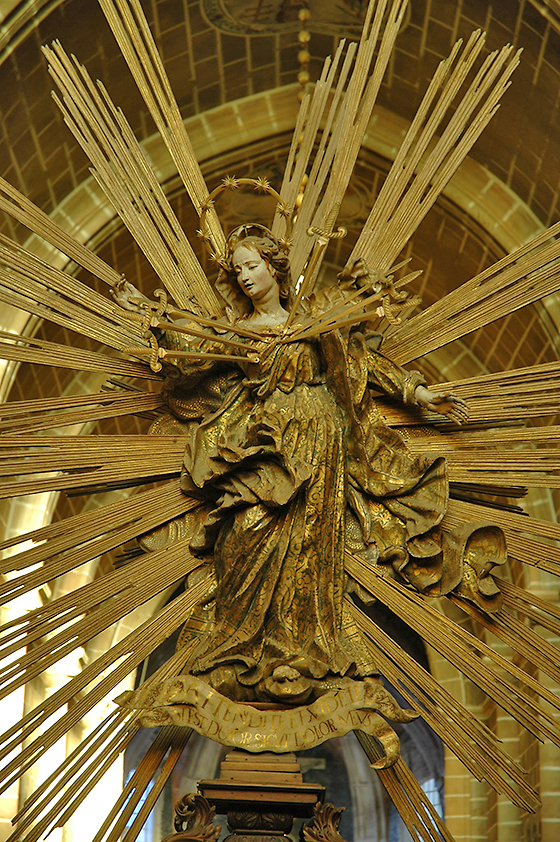 Our Lady of the Pains 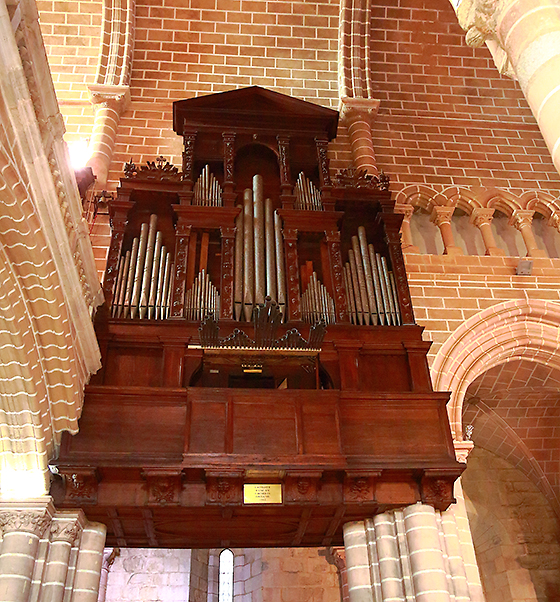 Located on the level with the Upper Choir, there is a pipe organ in oakwood.

It is and instrument from the 16th century in the so-called Iberian model, very rare and unique in Portugal.

It is clearly a sign of the relevance of the music at the service of the liturgy, which was celebrated daily with solemnity by the chapter delegates.

In their passage through Évora, four Christian princes which represented the first japanese embassy that came to Rome to visit the Pope, they felt very honoured for having played here.

Our Lady of Ó 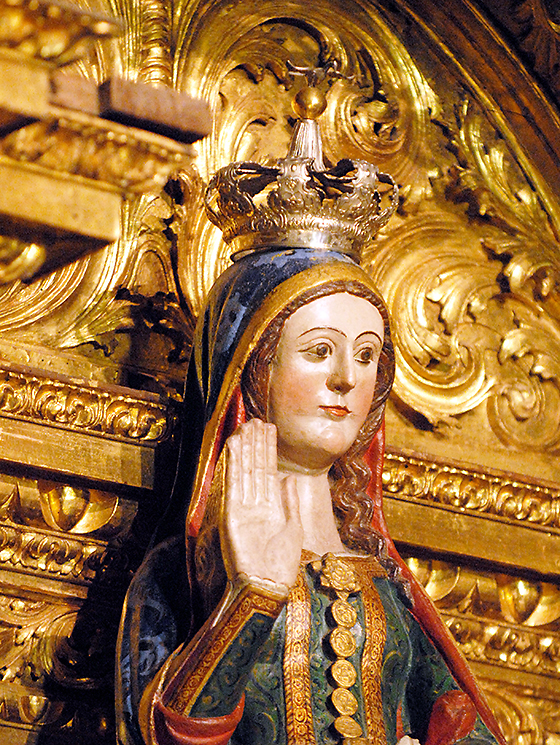 In the gilded wood altar of the central nave, one can see one of the most worshipped figures of the city of Évora.

It is known as Lady of Ó, due to its sizeable position of a pregant lady, showing her prominently enlarged womb.

There is a long tradition of having the bells of the Cathedral rung every time a woman gives birth to a child.

It is a beautiful 15th century Gothic sculpture in stone, with a solemn aspect, worthy of a Queen. 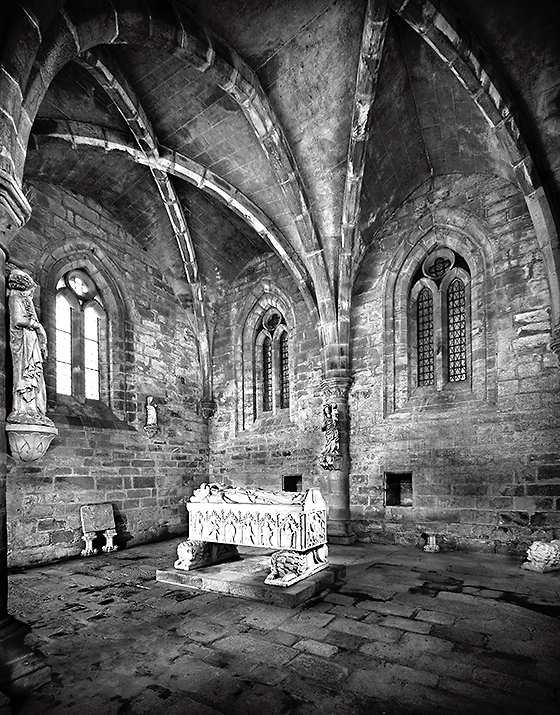 Chapel of the Founder

The cloister is one of the most beautiful monuments of Gothic art in Portugal, as can be seen by its ogival arches, on the vaults as well as on the windows.

Besides the beautiful set of figures, namely the four evangelists in the angles of the galleries, one cannot fail to gaze the Chapel of the Founder, the place where its beautiful Gothic temple, with the recumbent effigy in marble, is located.

With the cloister, the construction of the Cathedral was finished around 1350.